Lord Mayor Walter Lewis Bridgland AM OBE JP, Adelaide 1966-1968. Walter Bridgland was a member of the Adelaide City Council for 26 years from 1956-1982. He served as councilor, alderman and lord mayor. Grandson of Sir Lewis Cohen he served over-seas as a captain with the Australian Infantry Services, was a former state swimming champion and among several awards received the Royal Humane Society Award of Merit. He was active in more than 20 organizations, often holding the top office. To name a few, he was a former president of the Adelaide Festival of Arts, chairman of the Alcohol and Drug Addicts Board and vice- president and life-member of the Australian Foundation on Alcohol and Drug Dependence, life governor of the Adelaide Children’s Hospital and member of the state council of Meals on Wheels. Lady Esther Jacobs OBE JP Deputy Lord Mayor of Adelaide 1974-1975 and 1976-1977. Lady Jacobs was the first woman to serve on the Adelaide City Council and was the first woman alderman in SA. She was elected in 1956 and was a member for 22 years. In 1969 she was elected an alderman and served as the council?s first deputy lord mayor for two terms and also as acting lord mayor. She founded the Local Government Women’s Association. The Esther Lipman Gardens in the city, located behind the University of Adelaide and between Frome Road and King William Road, are named after her. Mayor Isaac Isaacs Adelaide 1915-1917. Isaac Isaacs was a member of the Adelaide City council for nearly 33 years. He served as a councilor from 1902-1906/1907 when he became alderman until elected mayor in 1915. After serving one term as mayor he was elected an alderman again and served until 1933. He was president of the Justice Association, chairman of the Liberal Federation, the Municipal Tramways Trust, the City and Suburban Local Board of Health and held important positions in other organizations. A football enthusiast, he was also a master of the St Andrews and Southern Cross Masonic Lodges and president of the Adelaide Jewish Philanthropic Society. 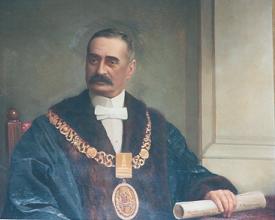 Sir Lewis Cohen Mayor of Adelaide 1889-1891; 1901-1904 and 1909-1911 and Lord Mayor of Adelaide 1921-1923. A successful banker, Sir Lewis Cohen was a member of the S.A. House of Assembly 1887-1893 and 1902-1906. Born in England, Sir Lewis was a member of the Adelaide City Council for 28 years between 1886 and 1927. He was a mayor seven times and initiated the campaign to grant Adelaide the lord mayoralty in 1919. Subsequently he served one term as lord mayor. Sir Lewis was president and treasurer of the Adelaide Hebrew Congregation, as well as being active in many other organizations in Adelaide. Knighted in 1924, his contribution to Adelaide is recognized by Sir Lewis Cohen Avenue, which runs North South between South Terrace and Greenhill Road. 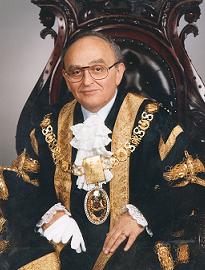 Lord Mayor Henry Ninio 1993-1997. Henry Ninio was lord mayor of Adelaide for two terms and was a member of the Adelaide City Council from 1983-1997. Born in Cairo, Egypt, he came to Australia in 1956, qualified as a pharmacist at the University of Adelaide and established the Piaf chain of perfumeries. He is a member of Beit Shalom Synagogue and was president in 1983. The French Government has honoured him for his services to perfumery and the French community of Australia. 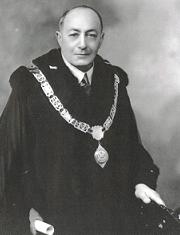 Mayor Samuel Gild – Unley City Council 1948-1949. A long-term resident of Wayville, Sam Gild was dedicated to local issues serving on the local council for more than 60 years as councilor, alderman and mayor. An engineer with the State Engineering and Water Supply Department he was also a member of the Goodwood Technical High School Council from 1942 until 1961. His commitment to the school was honoured by the building of “The Sam Gild Gates” on Lily Street, Goodwood. In 1943 “the Dora Gild Playground” was established in Churchill Avenue, Clarence Park, in honour of his wife. An active member of the Jewish community Sam Gild served as Trustee and Board Member of the Adelaide Hebrew Congregation. Photo from the Unley City Council. 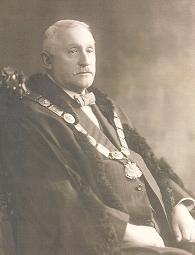 Mayor Nathan Solomons – Corporation of Kensington and Norwood 1918-1920. Nathan Solomon served on the council for nine years from 1919-1927, continuing as an alderman after his term as mayor. His mayoral term followed the war years and was a period of social and financial readjustment. Mr Solomons was the driving force behind the plantation which now graces the center of Osmond Terrace and the siting of the cannon captured by the Australian Light Horse Units during the Palestine Campaign 1917-1918. He was also responsible for the building of the granite soldier’s memorial column at the intersection of Osmond Terrace and Norwood Parade, which cost 5,000 pounds. His well-known Nat Solomon’s tobacconist shop marked the entry from Rundle Street (now Rundle Mall) to the Adelaide Arcade for many years. Photo from the City of Norwood Payneham and St Peters.