Members of the Jewish community in South Australia actively participated in the two world wars. 73 men and 3 women (nurses) answered to the call of duty, representing about 12% of our community during the First World War. Eight men sacrificed their lives and were killed in action.

43 men and 2 women were involved in the naval, army and air force services in the Second World War. They were present in every theatre of war wherever Australian forces fought during that war. Two lost their lives. Many Jewish men and women participated in the home war effort.

The rise of Nazism in Germany and the looming war brought a new wave of Jewish refugees to Australia from Europe from 1938 to 1940. Many families settled in Adelaide. Initially these people were classed as enemy aliens though they were fleeing from Nazism, and were only allowed to join the militia and Labour Corps for non-combat duties. Eventually they were permitted to join the fighting forces and many did. 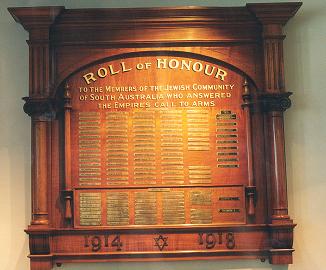 Roll of Honour Board at the Adelaide Hebrew Congregation. Photo taken by Keith Bailey 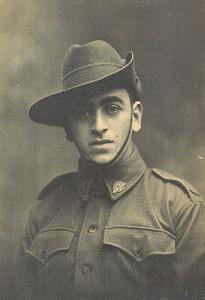 World War 1: Private Alfred Lipman joined up when he was 16. Served in 11th Australian Field Ambulance in France. World War 1: Sergeant Archie Saunders, served in the Dardanelle’s and Middle East and was killed in action at Battle of the Somme, Fromage in France on 14 August 1916. Buried at Boulogne Cemetery. The Kaiser Family, refugees from Germany in 1939, settled in Adelaide. Albert Kaiser served in the Labour Corps. Captain Walter Lewis Bridgland, served with CMF and AIF from October 1941 to March 1957. Served in New Guinea 1941-43. He was Docks Operating Commander at Medang and Fibschafen. On his return to Australia he became Officer-in-Charge of the Southern Region of South Australia and had the oversight of Italian Prisoners of War who were working on farms and vineyards. Lieutenant Colin Charles Millingen, served on continuous war service in the Australian Imperial Force from 31 May 1940 to 9 October 1946. Major Dr Sydney Krantz, joined 13th Australian General Hospital Unit in Singapore. Taken prisoner in 1942 by Japanese. Did forced labour on the railway Moulmein to Bangkok. He was operating without anesthetics and treating his fellow prisoners as best he could. He was repatriated after 3 years at the end of WW2. Flight Lieutenant Raymond Goldberg, after extensive service in the Middle East where he took part in a number of air battles, including that for El Alamein, was involved in air operations in the campaign in Sicily and Italy. He was awarded the Distinguished Flying Cross. 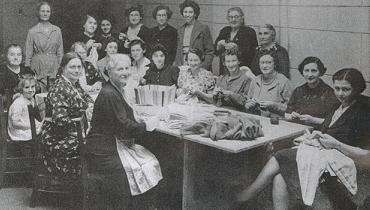 The Red Cross circles conducted by the Adelaide Jewish Women’s Guild and the National Council of Jewish Women forwarded thousands of garments and knitted goods. June 1941. Flying Officer Leslie Silver, enlisted in the Royal Australian Air Force in May 1943. Served as Navigator in Lancaster Bombers over Germany from a base at Waddington in the UK. 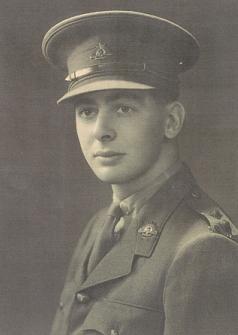 Captain Sam Jacobs, served in 1940-1942 in North Africa and Syria. Was an Honorary Colonel in the University of Adelaide Regiment from 1978 to 1992.