British migrants arrived in Adelaide in the 1950s, aided by the Commonwealth Ten Pound Assisted Passage Scheme. South Australia, with its Housing Trust programme was an enticing location. The new Jewish arrivals from Great Britain soon became active in local religious and social activities. Significantly, there were different practices in English and European Orthodoxy. 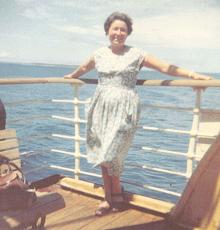 Janette Ailion, from Manchester, off the Suez Canal during her sea voyage to Adelaide in 1960. 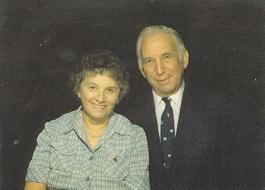 Maisie and Doug Kater, a family from London. Doug Kater was the first President of Beit Shalom Synagogue.

The first wave of refugees from Egypt to Australia arrived in 1947-48, following the war between the Arab nations and the newly formed State of Israel. Further waves occurred in 1956 and 1967 as a result of the Middle East conflict. An estimated 300 to 400 Egyptian Jews settled in Adelaide. The majority of them are Sephardi and their Jewish life focused on family and social interaction. Ninio family on the balcony of their apartment in Cairo. The Ninio family landing in Australia in 1960.

In the late 1970s, because of easing of restrictions on emigration, a trickle of Soviet Jews was allowed to emigrate. By 1980, six families arrived in Adelaide. Russian immigrants not only had the problem of a new language to overcome, but two generations under Communism had resulted in a total lack of religious and cultural input. However, the new immigrants brought with them a high standard of education and a strong work ethic. Irina Sverdlov (nee Novikov) and Leon arrived in Adelaide in 1992. They were permitted to bring 20 kilos of luggage and $100 cash for each person. Mr Yosel-Berk Shvartz (1816) of Nicolaev, Ukraine. He was the Great-grandfather of Irina Sverdlov, who immigrated with her family to South Australia. Copy of document from Russian Government confirming information about the murder of Irina’s Grandfather at Kharkov, Ukraine.

In the 1980s, a large number of South African Jews immigrated to Adelaide. They opposed the Apartheid system in place at the time and wished to raise their families in a more tolerant society. Most left extended families and successful professions and businesses behind. The South Australian climate was similar to South Africa and there was no language barrier to overcome. Many of the new migrants slipped happily into the Australian way of life. With the aftermath of World War II, Jewish Displaced Persons from many European countries relocated to South Australia. They involved themselves immediately in the religious and cultural life of the community. From 1937 to 1940 South Australia greeted an estimated 130 European Jews. A handful of Jews arrived in the State as German aliens deported from Britain, while more than 100 arrived as Displaced Persons (DP) after barely surviving the war in horrific circumstances in concentration camps and in hiding. Jetta Martz, aged 20. Photo taken in Poland. In 1949, aged 30, she arrived in Adelaide via Czechoslovakia and a displaced persons camp in Germany. Jetta originally came from Stryj, Poland. She escaped from a labour camp and went into hiding from 1943 to 1944 when the town was liberated. This Jewish family left Czechoslovakia in November 1968 immediately after the Prague Spring, the invasion by the Soviet Bloc troops of Czechoslovakia.